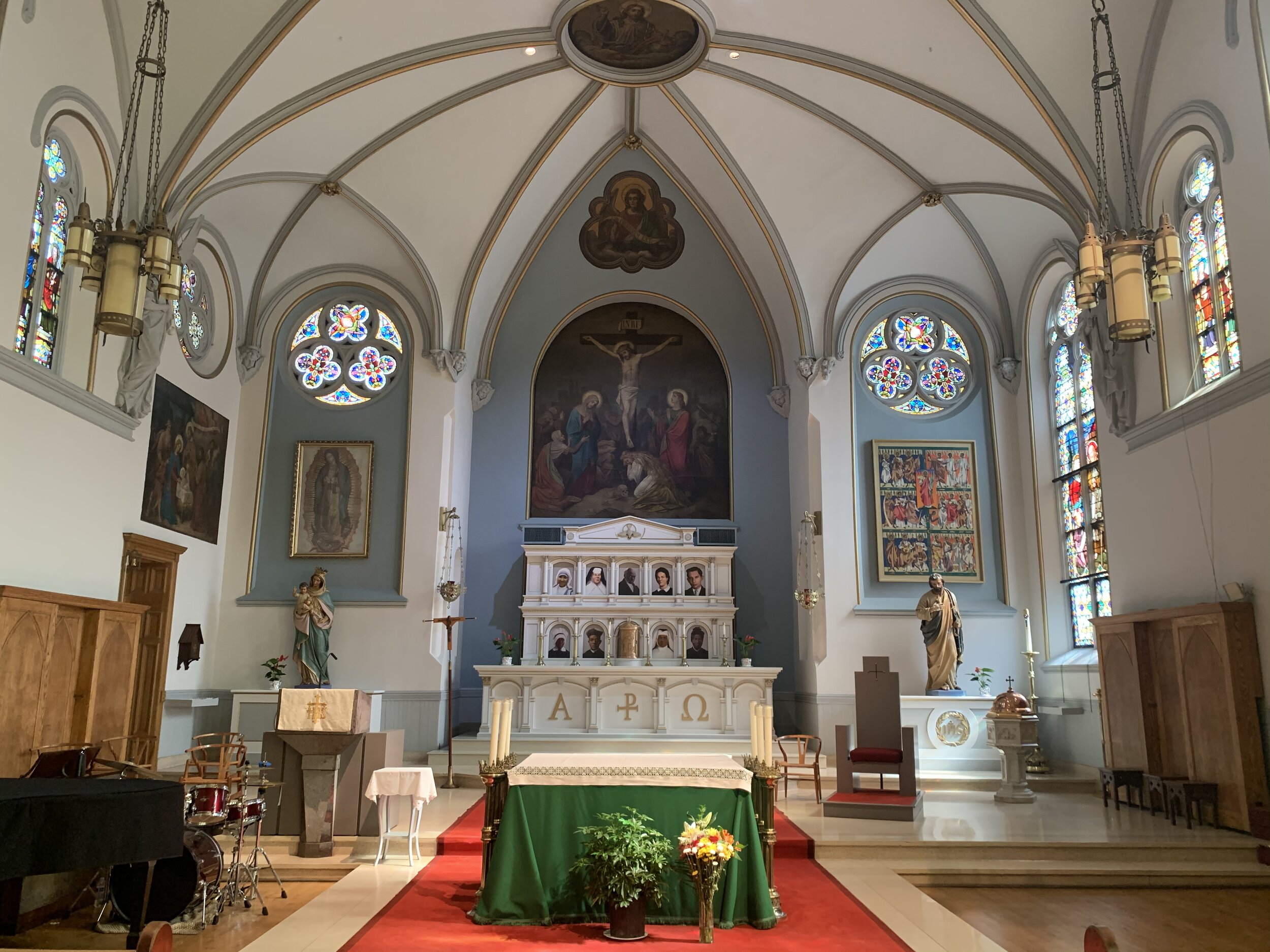 We are proud to have a diverse community here at
St. Joseph of the Holy Family Roman Catholic Church.
We have a rich history in the Harlem neighborhood of
New York City that dates back to 1860.

On August 28, 1859, a group of German Catholics from the Manhattanville area of New York met and agreed to purchase four parcels of land totaling 100 feet by 99 feet 10 inches at the corner of 9th (Morningside) Avenue and 125th Street that had originally been part of the land of William Molenoar. In the following months a building committee was established and officers were elected for the newly created parish.

The first priest to minister to the German-speaking Roman Catholic residents of Manhattanville, the Rev. D. F. Hartmann, was assigned by the archdiocese in 1859 and services were held in the chapel on the grounds of the Academy and Convent of the Sacred Heart. The cornerstone was laid on May 18, 1860 and the new Church of St. Joseph of the Holy Family was dedicated on September 5, 1860 by the Very Rev. William Starrs, Vicar General of the diocese. The brick church, which cost roughly $15,000 to construct, was large enough to accommodate 600 parishioners at a time.

The first pastor assigned to the church was the Rev. P. F. Karel (1860-64) who was followed by the Rev. Francis A. Gerber (1864-65). By 1865, the church was in financial difficulty and on September 5, 1865, the fifth anniversary of the church’s dedication, Cardinal McCloskey, Archbishop of New York, appointed the recently ordained Rev. Anthony Kesseler as its pastor.

Father Kessler was responsible for the 1871 and 1889-90 enlargements of the church and the construction in 1873-4 of the rectory. Father Kesseler was born in 1840 in the Rhenish province in Germany, immigrating to the United States in 1851. He received his general and religious education in various Catholic institutions and was ordained by Cardinal McCloskey on April 22, 1865.

In 1871 Father Kesseler hired architect Henry Engelbert to increase the length of the church by 15 feet. In 1888, Father Kesseler purchased the four lots and the former Methodist church building at the southwest corner of West 126th Street and Ninth Avenue.

The following year it was announced that the church had hired Herter Brothers to design a new St. Joseph’s on the same site. Having received approval from the Buildings Department, the architects sent a supplementary application indicating that the plans had been altered and that only a new addition measuring 44 feet in width by 48 feet in depth would be constructed at this time. The new structure was completed in 1890.

Father Kesseler is the priest most widely associated with the early history of St. Joseph of the Holy Family serving it from 1865 to his untimely death where he drowned at sea on board the La Bourgoone July 4, 1898. He was praised for staying back and giving guests of the ship their last rites. A plaque in Father Kessler’s honor hangs inside the church on the altar.

On June 14, 1966, the Landmarks Preservation Commission held a public hearing on the proposed designation as a Landmark of St. Joseph’s Church (Item No. 35). The hearing had been duly advertised in accordance with the provision of law. No one spoke in opposition. A representative of the American Institute of Architects spoke in favor of designation.